2012 May 15 I wanted to get a good look at a Toyota Rav’s and Honda CR-V as I’ve never really checked them out. I decided to stop in at Regina Honda and struck up a conversation with a used car salesman. It just so happened they had three used Hondas on the lot, a 2004, a 2000 and a 1997.… Read the rest 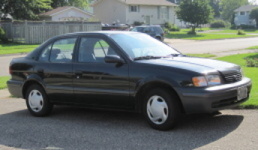 I got my Toyota Tercel fixed on Friday May 11 and it only cost me $252,00 total… and that included having them service my front brake calipers. While it’s fixed, I’m also pissed off as this is the same oxygen sensor that I had replaced back on October 01 2010.… Read the rest