I saw this meme on my FB page and I felt I needed to share it here. The caption below the image read as follows

“The worship of the state is the worship of force. There is no more dangerous menace to civilization than a government of incompetent, corrupt, orvile men. The worst evils which mankind ever had to endure were inflicted by governments.”

The caption doesn’t just apply to the state (government), but to any person, place or thing that you idolize and are blindly devoted to. Where you are either attracted to, or are repelled in fear, It really doesn’t matter as the effect is the same;that of an external person, place of thing having power and control over you… And YES, just because you approve and enjoy it, doesn’t mean that you aren’t controlled by it, as the only reason you are attracted to it is because it gives you a quick fix, feel good sensation and a false sense of power and control. And yes, I said FALSE, as you continually need to be re-energized by this external false idol in order to create that feeling again. Fear has the same effect on you, because you believe that the person, place or thing has power and control over you and so you obediently obey to its demands, or be punished.

This is exactly how society is controlled…by a Belief System (BS) that is an artificial construct.  The same holds true for the Easter Bunny,tooth fairy AND… all levels of government and organized religion (not God)…If you believe they exist and that you need to obey and follow them and their rules, then you are their puppet, their slave..

You don’t follow Hindu or Muslim customs and traditions.. WHY? It’s because you were not TAUGHT (imprinted and programed) with those social beliefs so they don’t apply to you and you are free of their control. 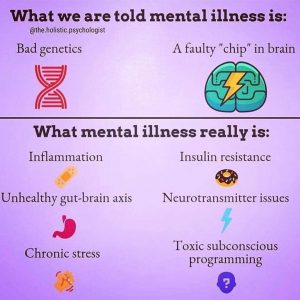 There are only two things listed in this meme that are the cause of what is misunderstood and LABELED as MENTAL illness, but is really Emotional distress. They are (1) Chronic Stress and (2) Toxic subconscious programming. Until the so-called modern medical establishment separates the MENTAL from the EMOTIONAL – this same type of TOXIC SUBCONSCIOUS PROGRAMMING will continue.. SSDD.