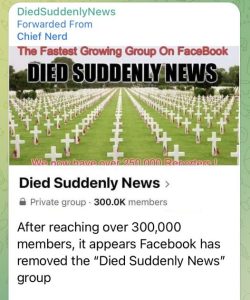 There was a group “Died Suddenly News” on Facebook that started a short time ago. The group shared personal experiences about people getting injured and drying from the mRNA lased “vaccine.” The group had just reached 300,000 members when it was taken down… DELETED… Not only was it deleted, but any messages I had posted were also deleted… Try to find any information on vaccine injuries and deaths and there are only some, like women’s periods might last a day longer than before or there might be the odd rash that lasts two to three days. GOOGLE is covering up what is really going on… The government, medical and media are playing dumb to what is actually going on.