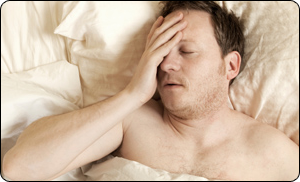 2012 Sept 19 Kyle was up until 2:00 am last night, or that’s the last time I looked at my clock to see what time it was. At one point, I tried to drown out the sound of his TV and vocals by playing my CD player, but it didn’t do much good.

I woke up at 8:00 am tired and pissed off. I started banging doors, dropping my weights on the floor and opening and slamming my dresser drawers so as to wake up the asshole. At around 10:45 am I thought that maybe he had gone out last night, that he wasn’t in his room, and that all my banging was for nothing. At 11:30 I saw him go to the bathroom and when he returned to his room, I stopped him and we had a little chat. During our conversation it turns out that the reason he slams his door is because it won’t close otherwise. I looked at it and found the screws for the top hinge were loose. I got a screwdriver and tried to tighten them, but they were just turning as if stripped. I told him to report it to the owners and have them fix it. I then showed him that if he lifted the door handle as he was closing the door, that it wouldn’t jam at the top and need to be slammed to close.

I asked him why he didn’t say that when I first commented on his door slamming and he said that he had other things on his mind. It was a good chat and cleared the air somewhat. I told him I was leaving at the end of the month and he mentioned that he was also looking for another place.