July 27 9:00 pm. With the month quickly ending and rent due, and not having an alternative place to live, I went to look at a room where the owner only had one tenant. It was a small two-bedroom home in a nice neighborhood, opposite a small park. When I went in, I could tell that the guy either was never married, or was divorced and never did much around the house. While it was basically clean, but it was also messy and dark, like in dark kitchen and furniture. He also had a one-year-old German shepherd dog that had a bed by the front door that was full of hair. The guy seemed nice enough and worked days at a local factory. 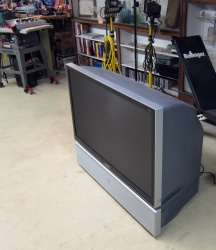 The bedroom was small, I’d say it was only 10’ x 10.’ It was had to really tell with all the BIG stuff in the room. As you walked in, you were greeted on the right side by a giant five foot TV, that jutted out a good 2 feet from the wall. Then beside the TV was a small computer desk, that you had to move if you wanted to open the door to get into the closet. The room had a regular bed that was situated more or less in the middle of the room with the headboard against the wall under the window. 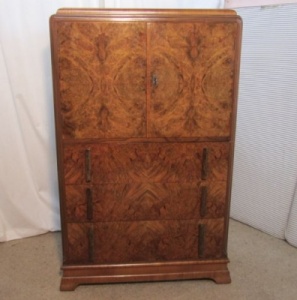 To the top right side of the bed in the corner was a nightstand and on top of it was a small bar fridge. To the left of the bed, in the middle of the wall was a gigantic tallboy dresser that had to be almost seven feet tall with three draws on the bottom section and two doors on the upper section. You could only open the bottom three drawers maybe six inches, before you would hit the side of the bed. He said the person that was presently renting the room was using it for clothes and also for his food and pots and pans. To say it was cramped would be an understatement. I said I would be interested, but the TV would definitely have to go and the room would have to be re-arranged so that I could use the entire tallboy comfortably. He said he had two other people coming to have a look at it on Saturday, and that if I was interested, he’d give me a call.

Later when I thought more about it, I really didn’t want it. It was also not going to be available until Aug 06, so that would mean if I moved out of where I am presently living at the end of the month, that I would have to find a room for a few days. Things seemed to be all up in the air and I didn’t know what I was going to do,yet at the same time, I wasn’t really worried or anxious.