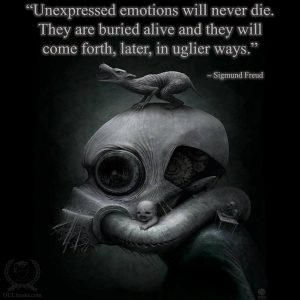 It’s not that the emotions are ugly… it’s what the long denied emotions are holding that is ugly..  The unlovingness that one originally experienced is taken in and accepted, and is added to by the self-imposed denial of emotional expression and this is what is finally being exposed for what it is. During an unloving physical, mental and emotional attack; if all the feelings and emotions are not expressed, the unloving energy of the attack is accepted into our being and imprints, programs and beliefs are set in place that holds and locks the denied feelings and emotions from moving and creates a cycle of similar unloving experiences. Until such time that one consciously chooses to delve into their past unresolved issues and fears, to heal and retrieve those lost and damaged parts of our being, nothing changes and death, created by denial, begins its process.- Shenreed