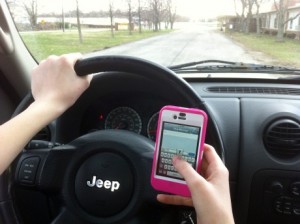 I had this idea today that a quick, easy, and cost efficient way to put an end to this dangerous practice is turn off the cell phone.. I don’t mean for the person that owns one and is driving, I mean for the Cell phone carriers, like Rogers, Bell, Tellus, etc., to do it..

Since Cell phones are equipped with GPS, it should be no big deal for the carriers to design and install software in their facilities that would turn off any phone that it detects as moving. With no phone service while a vehicle is in motion, that would put an end to this problem.. If you NEED to talk or text.. pull over and stop..

The only people that would bitch are the ones that are the problem.. The Carriers could also have it so that you would know if you had a call or message.. just that you can’t call out unless your phone is not moving..