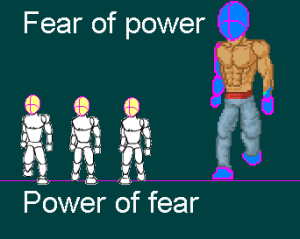 I happened to catch a bit of a war program on TV and the words that caught my attention were, “the fear of power, and the power of fear.” I feel there is a fine line between the two as the fear of power, of having power and being in control can be just as debilitating as being in fear of being overpowered. Part of the fear of power is in having the responsibility associated with the wrong use of it. The mind tries to find some balance in one’s life, in order to survive without becoming a tyrant. They are constantly weaving their way through and around any potential problems to avoid unpleasant confrontations in which they consider themselves as harming others, or where others feel they are being controlled and harmed. There is also of fear of being wrong associated with the fear of having power

The power of fear similar that in order to have fear, one must have experienced a situation where one felt overwhelmed, overpowered and helpless to change the situation. Being imprinted and programmed, the person now lives in constant fear of the unknown, projecting and expecting to experience what they fear, and looking for ways to avoid encountering it. The persons fear is their weakness as they will always be afraid that what they fear will be used against them.