I was thinking of this covid-19 plandemic and how the world governments and political leaders have gotten away with shutting down businesses and controlling the public. My initial reaction to hearing about the virus was one thing, and the governments, medical and media spin and the numbers game was another that raised red flags and I remembered information that I had that now began to make sense. Government politicians, bureaucrats, judges, lawyers, police, military, etc. are all working for a corporation, a factitious entity that is only real on paper. There are also numerous private corporate agencies working for different levels of government, all claiming to have “authority” and control over you. 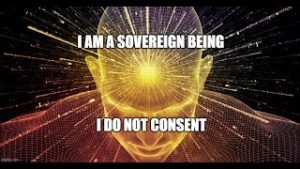 We come into this world as a sovereign being; free of any political affiliation, religion, race, social status or corporate identity. However, the moment we are born, that all changes. Through social customs, traditions and beliefs, our parents applied for a birth certificate because they were told, and naively believed it was required by the Federal government and its bureaucrats. The government using the name your parents gave you, issued you a birth certificate (corporate identity) using your name, example JOHN SMITH, along with giving you a S.I.N. number with which to identify and control you on your financial journey through life. This corporate identity is also known as your STRAWMAN and has many functions. To the government, you aren’t considered a human being; to them, you are more like collateral, like livestock that is recorded in inventory to be accessed as required. Upon your death, your dependants need to submit a death certificate, thus taking you out of inventory.

This was all imposed upon us as an infant, when we were incapable of knowing what was happening and expressing our desires and choices; we had no choice. Since then, we have been led to believe that our corporate STRAWMAN and our physical Sovereign being are one and the same. We have been intentionally lied to and led to believe that because we live in a democracy, that we are free, and that freedom includes a vote for the candidate of our choice. What we don’t know, and what we aren’t told, is that voting for a political party and candidate is really giving them CONSENT to rule us.

Any communication with any form of government or one of its agencies or a corporation like your job, taxes, bank account, credit cards, health-card, driver’s license, insurance, telephone, etc. are never addressed to you personally, but to your STRAWMAN, that you have come to believe is you. Your strawman’s name will always be in capital letters. The only mail you will ever get that is personalized, meaning, only the first letter of your first and last name is In capital letters, (John Smith) will be from family and friends. 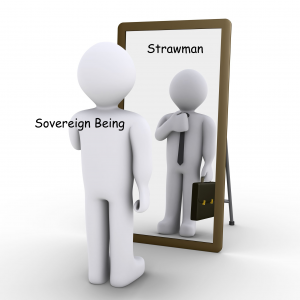 Now here’s where things get interesting. Any government authority figure, official or employee, also has a birth certificate and a corporate identity, a strawman that is recognized by the Government. Those working for the government are people choosing to follow orders crafted by others higher up on the corporate ladder who are also choosing to following orders of the unseen rulers hiding behind a veil of secrecy. People working for the government (a corporation) in a position of power, may claim they have the authority to make and enforce regulations, statutes, laws and rules, etc, but any such edicts are only valid as far as they concern the government and your strawman, they do NOT apply to your sovereign physical being. Controlling the strawman is part of their game, and while they also have a strawman, the rules don’t apply to them as they claim PIE (Privilege, Impunity and Entitlement).

The only jurisdiction a representative of a government or one of its agencies has, is related to the strawman and not to the individual sovereign human being. Saying that something is compulsory, mandatory, or the law is only a veiled attempt to get you to agree and submit to their authority. They can’t enforce what they claim WITHOUT YOUR CONSENT and agreement, and they know it. That is also why they’ve deliberately created this confusion between your sovereign being and your strawman; getting you to believe they are one and the same. Every regulation, statue, rule or law that they can get people to consent to, like what has been happening globally with the covid-19 plandemic and subsequent lockdowns and restrictions placed on people, just increases governments control and takes away personal freedom. The more confusion they can create and the more consent they can get, the more power people give them.

When a person rejects these “authority” figures, they will either try to intimidate and threaten you with fines, arrest or even physical violence and if that doesn’t break you, then they will play the good cop routine and try to coerce you into giving up your power and consenting to their demands. Unless you co-operate and consent to their demands, they have no power except that which you give them. You give them your power whenever you are in denial of expressing your true feelings in the moment you feel them in your present experience. You need to express everything you intuitively feel, including any feelings, emotions and physical expression. Not that you’ll need to use physical force, but that you are willing to defend your body to any physical attack on it.

Well that’s my hypothesis on how the game of the old-world system operates. The thing is that you can’t win if you continue to play the rigged game by their rules. To win, or rather, to be free of the old-world reality and begin to create a new reality, you have to stop playing their game. Now to put it to the test to see how a New-World can be created as the old-world and those that support it implodes.