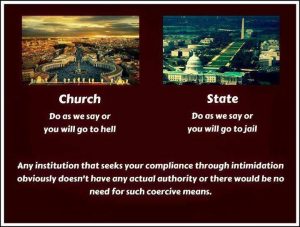 The two prime outer realities that shape our personal experiences are Religion and Government. Both have appointed themselves as having authority and dominion over not only the masses, but the Earth and all upon it. Know that these establishments are just puppets as there is a more sinister, “shadow” force that controls them both. Not that this shadow force controls religion or governments, but it controls the people in them.