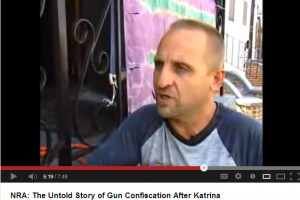 In watching this video clip The Untold Story of Gun Confiscation After Katrina, I found it interesting that one of the victims stated that he felt he was treated like he was in a third world country. (~5 min mark) I thought how strange that he has no objections over the USA committing terror, abuse and war crimes to others classified as third world countries, but doesn’t like it when he is treated that way. I felt that what is in store for America is Karma, and as they say, ”Payback is a bitch.”